Turn on suggestions
Auto-suggest helps you quickly narrow down your search results by suggesting possible matches as you type.
Showing results for
Show  only  | Search instead for
Did you mean:
Protect workloads with inline DDoS protection from Gateway Load Balancer partners
By

DDoS attacks are rapidly evolving in complexity and frequency. As we highlighted in our 2021 Q1 and Q2 DDoS attack trends review, we see that attacks in Azure have been trending toward shorter durations, mostly short-burst attacks. Workloads that are highly sensitive to latency, such as those in the multiplayer online gaming industry, cannot tolerate such short burst DDoS attacks, which can cause outages ranging from two to 10 seconds that result in availability disruption.

Today, we are announcing the preview of inline DDoS protection which will be offered through partner network virtual appliances (NVAs) that are deployed with Azure Gateway Load Balancer and integrated with Azure DDoS Protection Standard in all Azure regions. Inline DDoS protection mitigates even short-burst low-volume DDoS attacks instantaneously without impacting the availability or performance of highly latency-sensitive applications.

Deployment of inline DDoS NVA can be done in a few easy steps:

Gateway Load Balancer provides transparent flow (bump in the wire) using an overlay network with low latency, preserving the health of the host as well as the NVAs during the DDoS attacks.

Inbound traffic is always inspected with the NVAs in the path and the clean traffic is returned to the backend infrastructure (gamer servers). 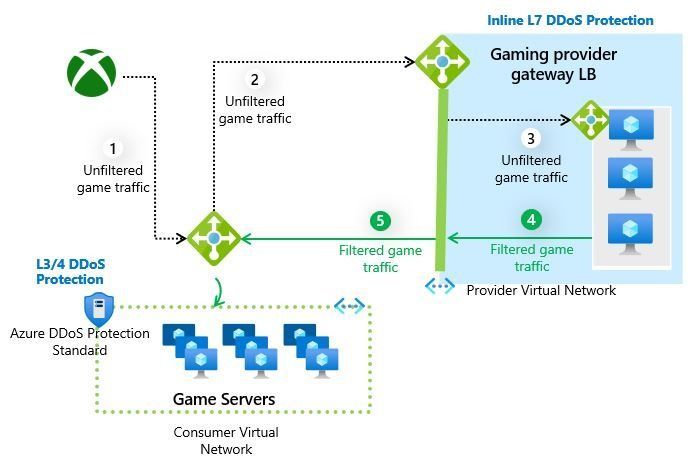 Enabling Azure DDoS Protection Standard on the VNET of the Standard Public Gateway Load Balancer frontend or VNET of the virtual machine will offer protection from L3/4 DDoS attacks.

A10 network will be our launch partner for this new solution, learn more about their inline 7 DDoS protection.