Turn on suggestions
Auto-suggest helps you quickly narrow down your search results by suggesting possible matches as you type.
Showing results for
Show  only  | Search instead for
Did you mean:
Automatically Configure Azure Firewall Rules to Allow Traffic to Office 365 Endpoints
By 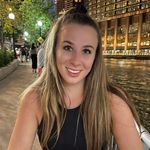 Azure Firewall is Microsoft’s cloud-native, fully stateful firewall as a service that provides the best of breed threat protection for cloud workloads running in Azure. With any firewall solution, the most important factor is the ability to control outbound and inbound network access in any easy, automated method. One common use case we see is customers needing to easily allow traffic communication through Azure Firewall to Office 365 endpoints that their users rely on for their day-to-day productivity. To make the process easier to allow traffic to Office 365, we have created a deployment template (detailed in the Deployment section below) to automate this process for you.

Before we go into the details of how this template works and the resources it creates, we will briefly define some common terms relating to Azure Firewall that will be used throughout this blog.

Figure 1 displays the hierarchy of a Firewall policy. To learn more, see this document.

Now that we have discussed the terminology of Azure Firewall policy, we can better explain how this workflow automation works. The workflow runs every two weeks to collect the newest Office 365 endpoints for Exchange Online, Microsoft Teams, SharePoint Online, and Microsoft 365. It then formats these endpoints into an Azure Resource Manager (ARM) template consisting of a rule collection groups that hosts a Network rule collection and an Application rule collection with the necessary Network and Application rules. The Logic App will store this ARM template and use it to create a new Azure Resource Manager deployment to update an existing Azure Firewall policy.

The automation has been published to the Azure Network Security GitHub repository, from where it can be deployed directly to your environment through the provided ARM template (found in the “Deploy to Azure” button in this blog).

An important thing to note is that in order to deploy the automation, your account needs to have Contributor rights on the target resource group that will contain the Logic App resource (see here for more information). When you are ready, you can click the Deploy to Azure button below to deploy the template.

During the deployment, you must specify some details, including the subscription, resource group, name, and region to host this automation. You must also configure the following: 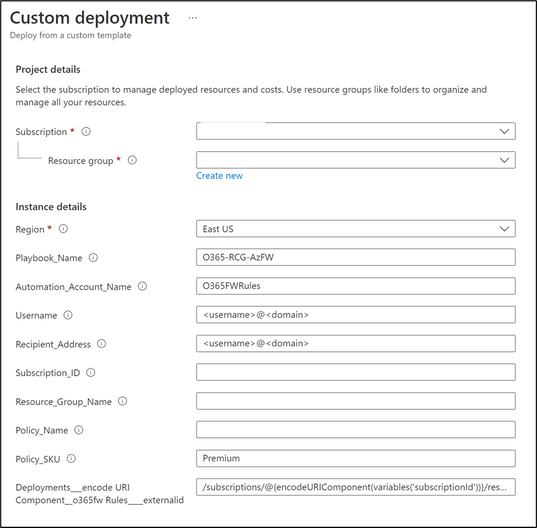 To authorize the API connection:

Figure 3 displays the logic built into the Logic App in the designer view. 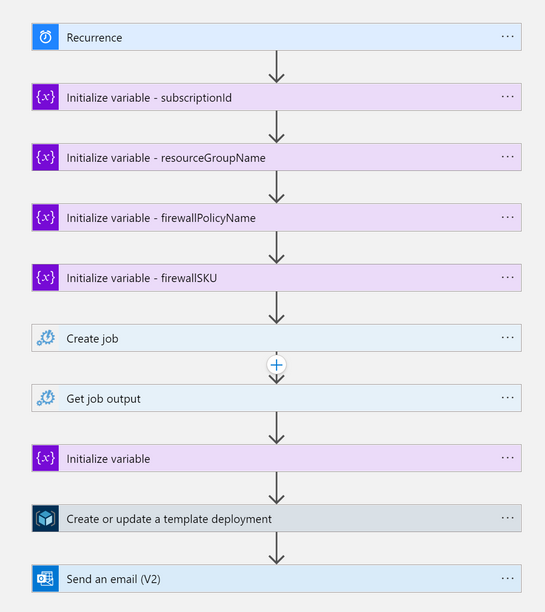 The automation is configured to run every two weeks by using a scheduler (frequency of which can be adjusted to meet your organization’s need). The automation sets the variables provided when the Logic App was deployed (i.e., subscription ID, Resource Group, Firewall Policy Name), runs the Automation Account runbook to generate the new Azure Resource Manager template for the O365 rule collection group, retrieves the output of the runbook job, updates the Azure Policy resource, and then sends an email notifying you upon completion.

In some cases, you may require certain modifications to the Logic App. Examples of how to make these modifications can be found below: 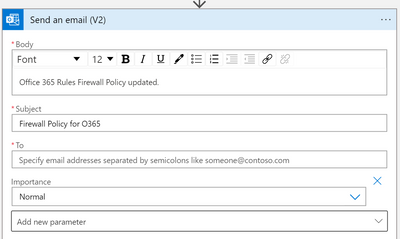 After you have deployed the resources and successfully ran the Logic App, it will create the required rules on your existing Firewall policy that you provided as an input during the initial template deployment.

When you navigate to your Firewall policy in Azure Firewall Manager, you should see the newly added O365_rulecollection group consisting of around 85 rules with one Network Rule Collection and one Application Rule collection as shown in Figure 4 below.

If you drill down into the respective rule tabs in Azure Firewall Manager, like Network Rules for example, you can see all the details of the rules that are created by this Logic App as shown in Figure 5.

One last important thing to note is that all the newly added rules are appended to the existing policy and the rules that you have already configured on the policy will not be affected. You may need to adjust priorities to ensure that the O365 traffic is allowed.

By using this automation template, you can now easily automate the process of updating rules to Office 365 endpoints at your required frequency without any manual intervention. This solution is the easiest method of grouping together Office 365 endpoints as there is currently no service tag for these services.

Although this blog and deployment was targeted for Office 365 endpoints, you can use the same process to automatically create Rule Collection Groups for additional services that provide a JSON formatted list of destinations.