Once running on Azure, legacy applications can be enhanced with web services, mobile capabilities, AI and IoT. Legacy workloads will seamlessly span old and new hardware and software architectures, giving the ability to extend the life of traditional systems and increase their value by modernizing with Azure services.

One important argument to move out of proprietary hardware and software platforms is that applications have been developed using legacy programming languages like RPG and COBOL, and programmers with these skillsets are retiring.

The new generation of software programmers don’t know RPG nor COBOL and are not interested in knowing them at all. Nowadays, they graduate from school knowing modern web technologies used by large software companies like Microsoft, Google, Facebook and Amazon. Such technologies include JavaScript, NodeJS, PHP, React, Angular, SQL Server, Cosmos DB and MySQL, to name a few.

AS/400 RPG and COBOL, like any other proprietary programming languages, use other software tools developed exclusively for running on their native platform, in this case, the AS/400, such as DDS (Data Description Specifications) to design screen formats as well as data files (physical and logical).

All of these technical issues are contrary to the modern development practices, where the functional, independent-object approach is applied to the different layers of the development cycle: user interface (UI), web server and database. Each layer should be independent of the rest of the application.

“Low Code” development tools like SYNON(CA 2E) or LANSA have been used to build legacy applications for the iSeries platform, designing the applications in their respective IDEs but generating at the end RPG or COBOL code.

And finally, the most of the legacy systems were big monoliths, running either as a single process or a small number of processes spread across a handful of servers. They have slow release cycles and are updated relatively infrequently. At the end of every release cycle, developers package up the whole system and hand it over to the ops team, who then deploys it and monitors it.

Today, these big monolithic legacy applications are slowly being broken down into smaller, independently running components called microservices. Because microservices are decoupled from each other, they can be developed, deployed, updated and scaled individually. This enables you to change components quickly and as often as necessary to keep up with today’s rapidly changing business requirements.

Microsoft has built an ecosystem of partners who can provide a specific solution for AS/400 users, based on their current requirements and needs: 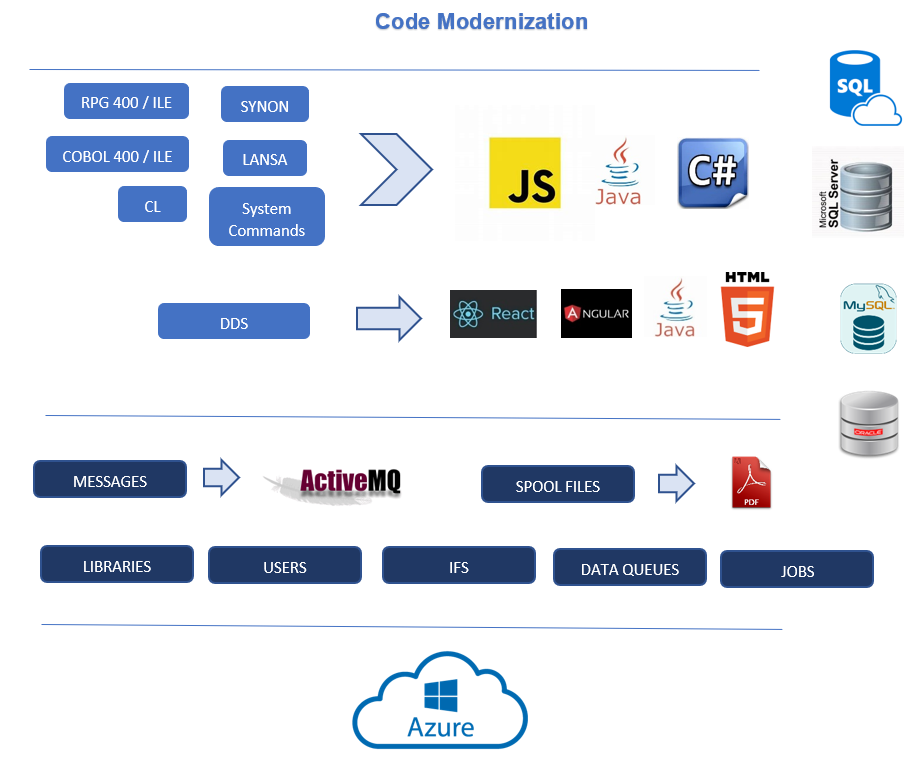 Migrating iSeries (AS/400) Applications to Azure

At the end, the customer can choose which operating system (Windows, Linux), Web Server (NodeJS, IIS, Apache) and database (SQL Server, Azure SQL Database, MySQL, MariaDB) they want to use.

The retirement of RPG/COBOL programmers won’t be an issue anymore. Both development teams, RPG/COBOL and JAVA/C#/C/PHP/Javascript programmers, can work together to maintain the applications and do the knowledge transfer easily.

For more information, please contact the AS/400 Division at the Azure Global CAT Engineering team.

Hi , Can I get more details on this, i am interested  in knowing the complete process, conversion and hosting of traditional AS400 application on to Azure.

I would be very much interested in some more details of this offering as well.

We will be glad to jump into a call with you to review the solutions we have for moving AS/400 workloads to Azure.

Hi Ricardo.  How would would someone get a hold of your team?  Working with a partner whose customer is running AS400 on prem and looking to move to Azure.  Would be a fun project to upgrade the entire environment.

I would be glad to speak with you about the interesting options we have to move AS/400 workloads to Azure.

Hi, does this solution include infinite I?

Yes. Infinite i is one of the options we have in our Partner ecosystem.

We have very interesting solutions, not only to migrate to Azure but also to modernize legacy applications.

Hello! I’d also like to get in touch with your team. I have a county that needs to move off AS/400 and could use some guidance. Thanks!

Hola Ricardo, I would also like to know more about how to migrate legacy IBM AS/400 systems to Azure in partnership with Microsoft's Services.

I work for IBM GTS / Cloud Migration and Modernization (now re-named Kyndryl). Can we setup a call to know what intial information would you need to estimate this type of migration project? / my email is andres.chavarria@ibm.com

Thank you very much for reaching out.

We will be glad to share with you the different options that we offer to our AS/400 customers to migrate/modernize their legacy applications.

I will set up a call with you.

Hi , Can I get more details on this, i am interested  in knowing the complete process, conversion and hosting of traditional AS400 application on to Azure.

Thank you for the explanation. But, could you pls provide me the name of the MS partners who work with this kind of migration (AS400 to Azure)? Thank you for your feedback, Best regards,

I would really need help working on AS400. My client has a Host system as AS400 and one of the application is on-perm and they wanted to migrate all of it to Azure. I have done some research and need more details on how to migrate and what are the pre-requisites... Thanks for your help in advance