Turn on suggestions
Auto-suggest helps you quickly narrow down your search results by suggesting possible matches as you type.
Showing results for
Show  only  | Search instead for
Did you mean:
Migrating iSeries (AS/400) Legacy Applications to Azure with Infinite
By

Migrating iSeries (AS/400) Legacy Applications to Azure with Infinite

If you plan to keep maintaining your legacy applications written in RPG, COBOL and CL for the next few years, but you also want to move the AS/400 workloads to Azure, there is a very interesting solution: Infinite Corporation.

Infinite provides a very similar development and production environments as the AS/400: menus, command line, user interface (green screens). The software product is called Infinite i. It is a suite of utilities, compilers and services that allow RPG and COBOL applications run and perform in Azure as if they were in the AS/400. The source code has to be recompiled in Azure to be deployed natively.

In order to run on Azure, the RPG, COBOL and CL applications are converted to C (business rules) and JAVA (user interface). You are also free to modify the C and JAVA source code rather than the legacy source code.

The DB2 database is replicated in Azure by converting it to either SQL Server or Oracle to run on Windows Server or Linux. 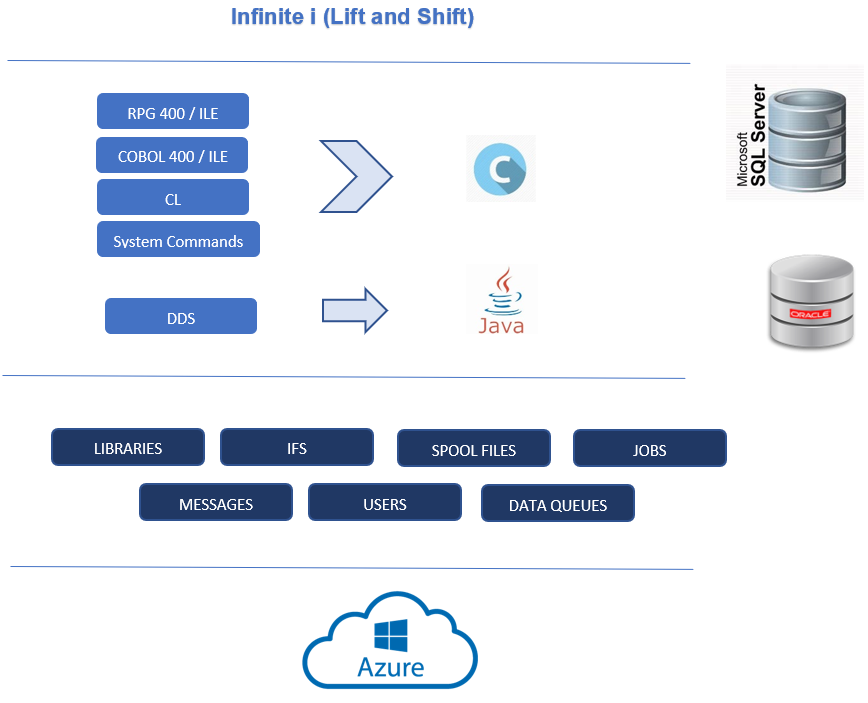 Migrating iSeries (AS/400) Applications to Azure with Infinite

For more information, please contact the AS/400 Division at the Azure Global Engineering team.