This article provides a demo of processing tokens as part of the build and release, using Release Management.

Note: Versions of TFS and Release Management used are both 2013 update 4.

Create the project and check-in to TFS

For demo purpose, I am creating a sample console application, which reads and displays the database server name from the app.config file. This is just an example, to show how tokenization works with release management, practical usage will depend on your application.

DatabaseConnection.exe.config: The config file has one entry, as follows:

Make a copy of the config file, and rename it to DatabaseConnection.exe.config.token.

Replace the value of DatabaseServerName, with a configuration variable, starting and ending with double underscore. I have named the variable as “__DBNAME__”

Upon execution, the application will just read this from the config file and display the database server name. Sample output as follows:

I have also checked in the code to one of the team projects in TFS.

Before creating the build definition, you would have to get a copy of the ReleaseTfvcTemplate.12.xaml file, and check it in to source control (if not already done), as we will be using this template for the build.

Note: The Release templates can be found in the below location on your Release Management server:

Create a new build definition using the release template, and set the below properties: 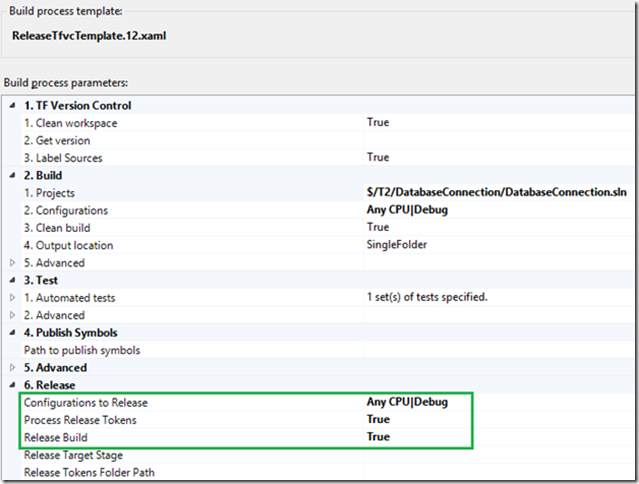 Create a new release template, set the Release Path and select the build definition that we created.

I will be using this template to Release the build to test environment. My Release path has one stage called Test, and the end goal would be to modify the DatabaseConnection.exe.config to change the value of DatabaseServerName variable to ‘TESTDB’, as part of the release, by processing tokens.

Add the target server and choose and add a component to do the release. I will be using XCopyDeployer tool, to copy the build outputs to the target Test server. 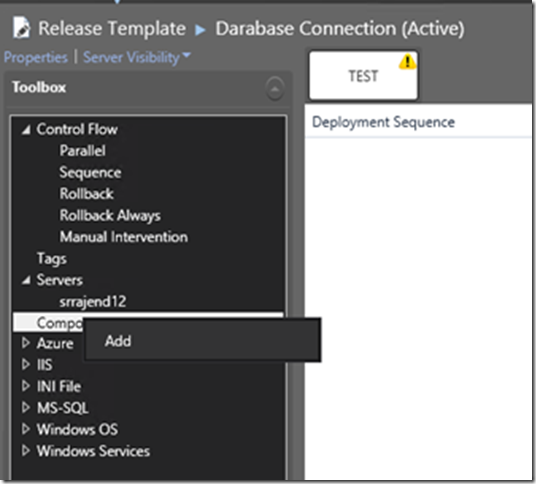 Select Builds with application in the source tab. In the deployment tab, I have chosen XCopy Deployer as the tool. 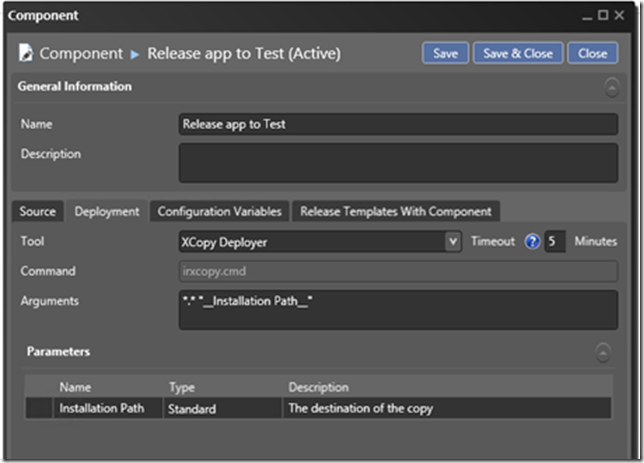 Switch to the Configuration Variables tab and then add the variable name. Please note that this should be the same variable we have added to the DatabaseConnection.exe.config.token file (in my case it was called DBNAME). 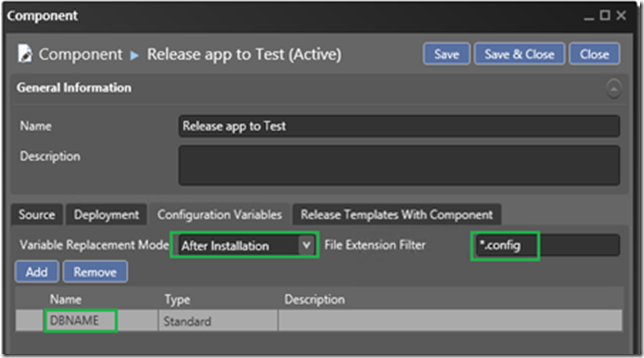 Variable replacement mode is set to ‘After Installation’ – this indicates that the variables will be replaced after the execution of the XCopy Command. The files originally being coped to the server (before executing XCopy) will not contain the right values, but rather the files contained in the ‘Installation Path’ folder will have the appropriate values.

More information on variable replacement mode can be found in this article.

Set the file extension filter to *.config – this would mean that the variable replacement logic will look through all the config files.

Drag the server name to the release sequence and then add the component that we created. Double click on the component to set the variable values.

I have set the below values. The value ‘TESTDB’ for DBNAME indicates that the value of DBNAME variable will be replaced with ‘TESTDB’. This would have been the name of the actual test server, in a real scenario.

Queue a build and wait for the build and release to complete.

In my case, once the build is complete, I connect to my test server and check the installation path (C:\DatabaseConnection). We can see that the files have been copied over: 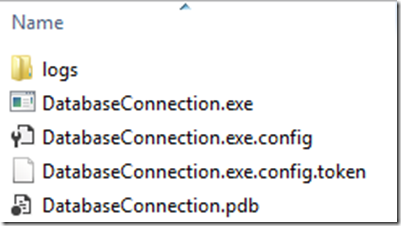 I run the exe to verify the output:

If I open the DatabaseConnection.exe.config file now, we can see that the value of the key DatabaseServerName has been replaced by ‘TESTDB’ (it was set to DEVDB in my application)

You can choose to add more stages, and different values can be assigned to the sever names and other variables, based on the stage/environment that you are releasing to, without updating the values manually.

Same technique can be used to tokenize web.config files as well.

Feel free to let us know if you needed any clarifications/improvements.