AzureFunBytes is a weekly opportunity to learn more about the fundamentals and foundations that make up Azure. It's a chance for me to understand more about what people across the Azure organization do and how they do it. Every week we get together at 11 AM Pacific on Microsoft LearnTV and learn more about Azure.

This week on AzureFunBytes we flex some Azure muscle with Bicep. Bicep is a language that allows you to use declarative syntax to codify your Azure infrastructure deployments. Bicep is an Azure native Domain-Specific Language (DSL) that promotes a cleaner syntax, improved type safety, and better support for modularity and re-use of code. Bicep is a transparent abstraction over Azure Resource Manager (ARM) templates that gives you the ability to create nearly any required resource with in Azure. Bicep has a playground that allows you to start using existing ARM Template Quickstarts right away. Or if you choose to build them from scratch, the snippets with the VS Code Bicep extension will be a huge help. 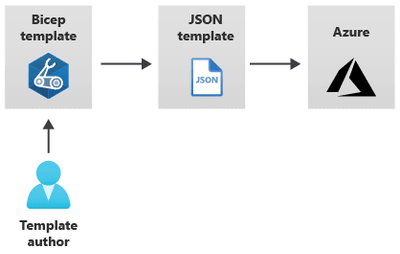 I was lucky enough to get one of the experts on Bicep to join us this week! We'll welcome Microsoft Program Manager Alex Frankel to the show to give us greater insight into how to use Bicep to create our infrastructure. I'll ask Alex your questions, we'll look at some Bicep basics, discuss best practices, and even kick off some deployments. Don't miss this incredible opportunity to learn about building your Infrastructure as Code (IAC) with Bicep!

Full details of how the Bicep language works can be found in the [Bicep documentation] and there is a rich library of examples to help you get a jumpstart.

From the Bicep GitHub repository docs, how to get started:

To get going with Bicep:

Alternatively, you can try the Bicep Playground or use the VS Code Devcontainer/Codespaces repo to get a preconfigured environment.

If you have an existing ARM Template or set of resources that you would like to convert to .bicep format, see Decompiling an ARM Template.

Full details of how the bicep language works can be found in the Bicep documentation and there is a rich library of examples to help you get a jumpstart.

How does Bicep work?

First, author your Bicep code using the Bicep language service as part of the Bicep VS Code extension

Both Az CLI (2.20.0+) and the PowerShell Az module (v5.6.0+) have Bicep support built-in. This means you can use the standard deployment commands with your *.bicep files and the tooling will transpile the code and send it to ARM on your behalf. For example, to deploy main.bicep to a resource group my-rg, we can use the CLI command we are already used to:

For more detail on taking advantage of new Bicep constructs that replace an equivalent from ARM Templates, you can read the moving from ARM => Bicep doc.

Here's an example of a Bicep template to create a two subnet Azure VNET:

You can add parameters, use modules, link templates, set variables, and set outputs within your template. You can deploy your Bicep templates using Azure CLI, PowerShell, and even the Azure Portal.

Learn about Azure fundamentals with me!

Live stream is normally found on Twitch, YouTube, and LearnTV at 11 AM PT / 2 PM ET Thursday. You can also find the recordings here as well: