Not sure if everybody saw the announcement a couple weeks back, but Azure Functions now allows you to create proxies:
https://blogs.msdn.microsoft.com/appserviceteam/2017/02/22/azure-functions-proxies-public-previ...


While you might think at first glance "what's all the hubbub about?" this feature is actually quite nifty. It allows you to establish microservice patterns by breaking up Functions, and expose a unified endpoint to the client side. Which should be enough by itself to consider using it, but it also allows you to do other useful things like building an API Gateway implementation which can come in handy both for prototyping and production purposes.


Will this be the end of Azure API Management or Apigee? No, not by a longshot. Those products have features for actually managing APIs, and doing things like access control, throttling, and a whole lot more. It's just that sometimes this is overkill for what you actually need in a given developer situation.


When I build my own APIs I might have a prototype client to call into them for basic verification while I work at the back-end. I might do the old approach of commenting out code while writing new test code to test a different approach, but inevitably I end up with multiple endpoints as I work along different paths before deciding which one will be the best. This is kind of a hassle since this means I have to do minor edits in the client just to call into a different endpoint, which feels sort of pointless. (Whether I change a string in the code and recompile, or edit a textbox in the UI it still counts as an edit.) With the proxy functionality in Azure Functions you can expose one endpoint to the client, and just juggle the actual API being used in this proxy.


First thing we need is to expose some APIs. These will be dead simple, and nothing fancy. To do this we also use Azure Functions.


Create a new Function app in the portal, and go to the Integrate tab. 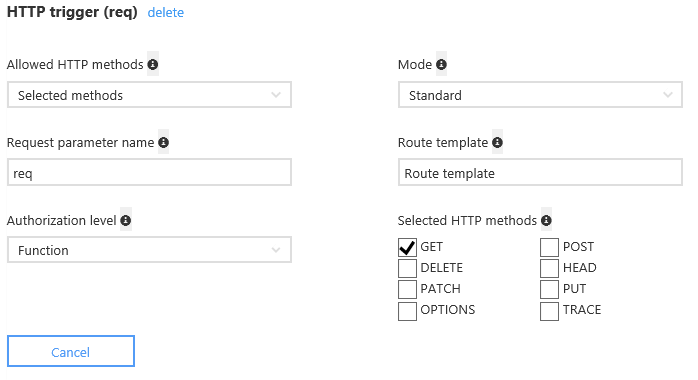 As you can see I have selected GET as the verb here, and nothing else.


I went with the following code on the Develop tab:

You can use the Test tool on the right hand side if you would like to make sure you didn't mess up something: 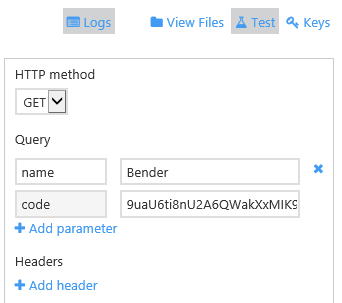 So far so good. I create a second Function App this time with the POST verb allowed:

Could I not have placed these in one Function App, as two separate functions? Yes, I could have, but illustrating the proxy concept works better this way in my opinion.


The code for this Function can actually be the same as the previous snippet. (Well, I changed the response to prefix the greeting with POST instead of GET to know which back-end returned the result.)


Just to make sure things are good so far we use Fiddler to verify we get the responses we want. 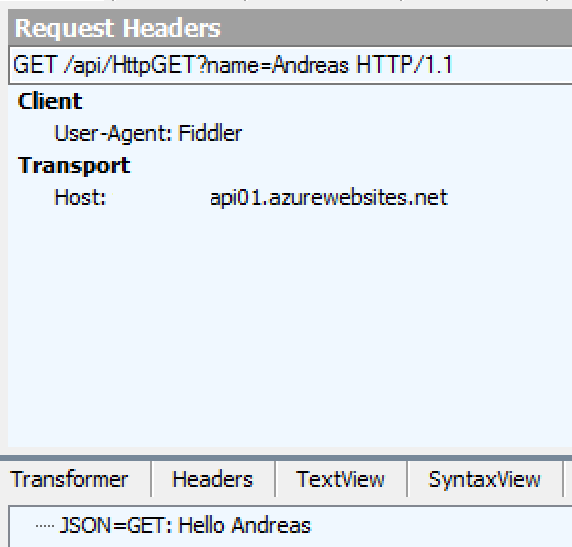 HTTP POST
Remember to include a body for this request (and if you get an error 500 it's because you forgot to include Content-Type: application/json as a header) :

Hopefully the response will be fairly similar to the GET. 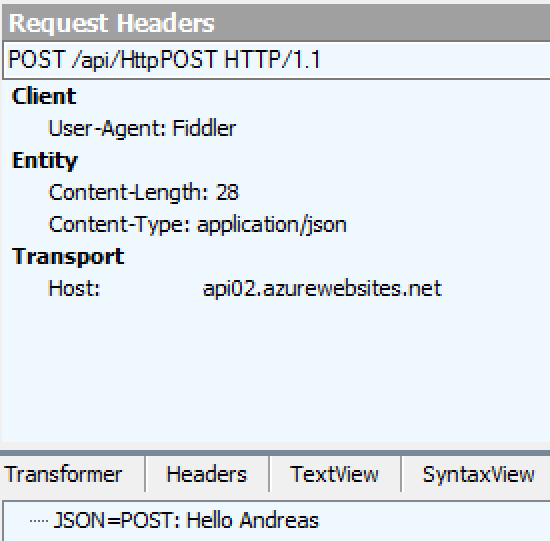 Setting up the proxy


There's not that many steps to this really. You need to enable proxies under Function app settings. And create two new proxies like this:

And then you can change things around in your Fiddler client the way you want it to. The "gateway endpoint" stays the same, and as you modify which back-end endpoint serves the request you just edit the proxy parameters accordingly.


Well, this is nice and dandy, but what prevents me from skipping the proxy, and hitting the back-end directly? Nothing right now. What you can do as a workaround is to have authentication configured on the back-end requiring a code in the query string, and either go with a different code on the proxy or anonymous for that matter.


What if I have more creative needs like modifying the inbound request before making an outbound request from the proxy to the backend? Well, this isn't the final version of the proxy feature. I am not able to comment on the future, but expect more tweaks and settings to be added.


Do I have to go through the UI to work with the proxy setup? No, you can access the file directly by opening up proxies.json under site/wwwroot , and edit things. (Kudu works nicely for this purpose.)

Having an API Gateway isn't of much use if we don't do more exciting things than Fiddler on the client side, but what we can do on the other end of the wire is a story for another time. (Read: I'm working on that. After some consideration I deemed it to make sense to do the server part first though.)