Turn on suggestions
Auto-suggest helps you quickly narrow down your search results by suggesting possible matches as you type.
Showing results for
Show  only  | Search instead for
Did you mean:
Achieve up to a 50% performance boost in Azure Database for MySQL Flexible Server using thread pools
By 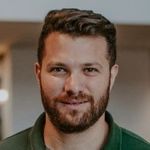 Thread pools enhance the scalability of the Azure Database for MySQL – Flexible Server.  The graph below represents queries per seconds (QPS) for read only workloads which you can achieve on a General Purpose D16ds_v4 (16 vCores, 64 GiB memory) server with and without thread pools. 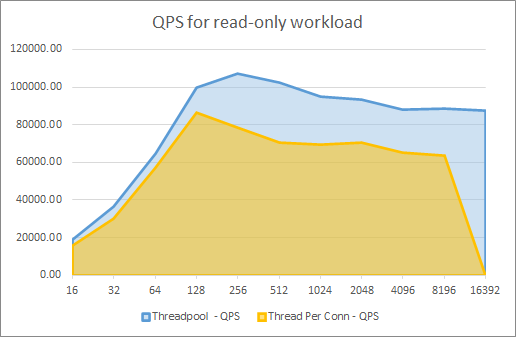 Using a thread pool allows you to support higher connections, extract more throughput, and overcommit the number of vCores available on the server to maximize performance, assuming the server has enough memory. For instance, the max_connection limit for a General Purpose D16ds_v4 (16 vCores, 64 GB memory) compute size is 10923 connections, while using a thread pool enables you to achieve far more throughput by exceeding the max connection limit.

MySQL typically assigns a thread for every client connection. As the concurrency level increases, performance degrades because of high CPU utilization specifically when active sessions exceed the CPU capacity available on the server. A high number of active threads may impact performance significantly as a result of increased context switching, thread contention, and bad locality for CPU caches.

A thread pool, which is a server-side feature distinct from connection pooling, maximizes performance by introducing a dynamic pool of worker threads that limit the number of active threads running on the server, minimizing thread churn. Instead of creating a new thread for each new connection, a thread pool assigns one of the threads from the pool to handle the request and then returns the connection to the pool after the operation is completed. This helps to ensure that a burst of connections won't cause the server to run out of resources or crash with an out of memory error.

Note: The thread pool feature in Azure Database for MySQL – Flexible Server is supported only on MySQL version 8.0.

To estimate the potential performance improvement when using a thread pool in Azure Database for MySQL – Flexible Server, we ran a sysbench benchmark with read-only queries on a 16 vCore General Purpose server. The image below shows that thread pooling improves performance by up to 50% for the read-only workload, a result of the reduced latency. 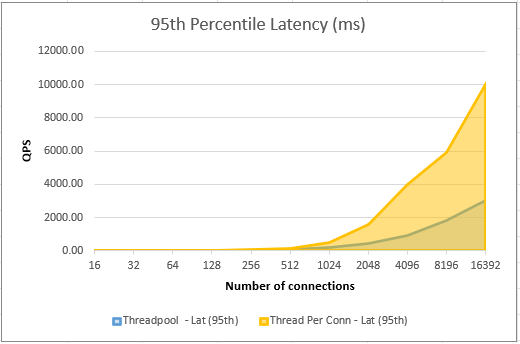 When using a thread pool is most efficient

Configuring thread pools is most efficient when scaling the performance of short, chatty but persistent, and CPU-intensive workloads, for example OLTP workloads. Some scenarios in which you should consider configuring, testing, and enabling thread pools on your Azure Database for MySQL server are listed below.

You can see the benefits of using a thread pool with high concurrency workload. For example, the graph below shows QPS for sysbench OLTP workload (70% read / 30% write) on a General Purpose D16ds_v4 (16 vCores, 64 GB memory) Azure Database for MySQL - Flexible Server instance. As you can tell, the value of the thread pool (blue chart) is only visible when the concurrent connections on the server exceeds 100, as the thread contention is higher at higher concurrency. 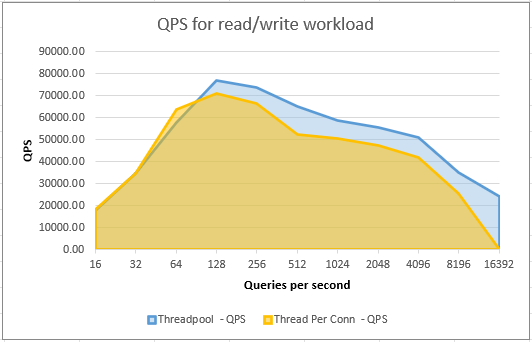 When using a thread pool is less efficient

Using thread pools in some situations is likely to be less efficient, and therefore their use is not recommended in these scenarios.

Configuring a thread pool on an Azure Database for MySQL server

To enable a thread pool, update the value of the thread_handling server parameter to "pool-of-threads" by navigating to the Server Parameter blade in Azure portal or using Azure CLI. By default, this parameter is set to one-thread-per-connection, which means MySQL will create a new thread for each new connection. Note that this is a static parameter and requires a server restart to apply.

You can also configure the maximum and minimum number of threads in the pool by setting the following server parameters:

To improve the performance of short persistent queries on the thread pool, in Azure Database for MySQL - Flexible Server you can enable batch execution so that threads remain active for a short time to wait for the next query through this connection rather than returning them to the thread pool immediately after executing a query. The thread then executes the query rapidly and when finished, it waits for the next query, until the overall time consumption of the process exceeds a threshold.

I hope this information provides valuable guidance about when and how to use thread pools to improve the throughput of your Azure Database for MySQL - Flexible Server instance! As always, we welcome your feedback and suggestions, which you can provide by posting a comment below or by reaching out to us via the Ask Azure DB for MySQL alias, AskAzureDBforMySQL@service.microsoft.com.