In recent months we have seen an increasing volume of print cluster cases being opened due to poor performance. For example slow failover or spooler crashes. This article is provided as a guide for print server administrators to identify and resolve possible causes of these performance issues.


From the HP web page above:


“When installing product specific drivers, it is recommended that the latest driver be used.  The latest version of the driver can be found at hp.com. Also, the driver should be
installed onto every node in the cluster prior to being installed onto the Virtual Print Server”


You will need an account with Xerox to access the link above and obtain the documentation referenced below.


2.    There should not be multiple versions of the same HP Universal Printer Driver on the local nodes or the spooler resource, Example:  versions (5.0) and (5.1) ,

The installed drivers can be found by using Regedit.exe:


3.     Ensure the newest version of your Universal Print Driver which is installed on the spooler resource matches the version installed on the local nodes (should be at least 5.1 for HP UPD).
Remove older versions of the UPD on the spooler resource and local nodes after changing all Print queues to the newest version. The removal can be done by going into the Print Server Properties under the Drivers tab.


Note: Print Server Properties can be accessed on 2008 and earlier by going into Printers and Faxes or Control Panel : Printers, right-click an empty area where the print queues are listed. Select Server Properties from the menu.


On Windows 7 And Windows Server 2008 R2, go into Printers and Faxes , select a print queue and the Server Properties option will be available in the toolbar.

If possible, all Version 2 (Kernel Mode Print Drivers) originally designed for NT 4 systems should be replaced with Version 3 print drivers. Version 3 drivers are recommended over Version 2 drivers because they support advanced printing features and improved performance. If a server stops responding as a result of a Version 3 driver problem, you only need to stop and restart the print spooler instead of restarting the server. Additionally, Version 3 drivers can reduce printer downtime, because Windows Server 2003 provides automatic recovery of the spooler service by default. If a Version 2 driver stops responding, you must reboot the server, taking all other services offline while the server restarts. In addition, Version 2 printer drivers operate in kernel mode (inside the operating system kernel memory space) and are designed for Windows NT 4.0. Because of this, if a Version 2 driver crashes, it can effect the stability of the whole kernel instead of just the spooler process.


There are 3 ways to determine if there are Version 2 drivers running in your environment:


A.    Open Regedit.exe and check HKLM\SYSTEM\CurrentControlSet\Control\Print\Environments\Windows NT X86\Drivers and if there is a Version 2 folder with drivers listed under it then you have some installed. 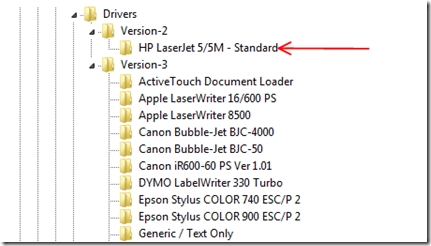 C.    Alternatively you can check for version 2 drivers by opening Print Server Properties and clicking on the Drivers tab. Under the Version column Version 3 Drivers will show Windows 2000 and newer; however if it is a version 2 driver it will list Windows NT in the version column. Version 3 printer drivers operate in user mode (outside the operating system kernel memory space) and are designed for Windows 2000, Windows XP, and Windows Server 2003


5.       Removing drivers on the spooler resource that are not currently assigned to a print queue can help spooler stability. As a general rule of thumb the fewer drivers in your environment the more stable and the faster the Cluster Print spooler can fail over. To cleanup unused drivers: Note: Do not do this if you are using Terminal Services with Printer Redirection.


Note: An alternative to Microsoft Print Clustering is Windows 2008 R2 Clustered VM.  You can cluster a Print Server VM and create Snapshots.  It is a nice alternative given printer vendors do not always test their print drivers on a Microsoft Print Cluster.  Clustered VMs is a new Hyper-V feature called Live Migration in Windows Server 2008 R2, which requires the failover clustering feature to be added and configured on the servers running Hyper-V. Hyper-V and failover clustering can be used together to make a virtual machine that is highly available, thereby minimizing disruptions and interruptions to clients. Live migration allows you to transparently move running virtual machines from one node of the failover cluster to another node in the same cluster without a dropped network connection or perceived downtime. In addition, failover clustering requires shared storage for the cluster nodes. This can include an iSCSI or Fiber-Channel Storage Area Network (SAN). All virtual machines are stored in the shared storage area, and the running virtual machine state is managed by one of the nodes.


If you’re configuring a 2008 R2 Print cluster it is highly recommended the hotfix below is installed.


The 5 Steps I have outline in this document may not resolve all of the issues in your clustered Environment, however If you are experiencing slow failovers or spooler resources crashing this may be a very good place to start.