Turn on suggestions
Auto-suggest helps you quickly narrow down your search results by suggesting possible matches as you type.
Showing results for
Show  only  | Search instead for
Did you mean:
TS: Remote Desktop Client 6.x
By

Scoping the Issue: Most of the issues seen with the RDC 6 client are related to changes in behavior that were made to support the features of Windows Vista and Windows Server 2008. Visually, the RDC 6.0 and RDC 6.1 clients look almost identical, so it is very important that you determine what version you are running by looking at the RDC client help.


To determine the RDC client version, do the following: 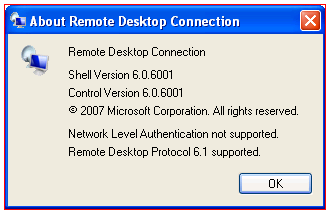 Data Gathering: In all instances, collecting either MPS Reports with the General, Internet and Networking, Business Networks and Server Components diagnostics, or a Performance-oriented MSDT manifest must be done.  Additional data required may include the following:

Troubleshooting / Resolution: The following are a few of the most common issues that we have seen with the RDC 6.0 and 6.1 and how to troubleshoot them.


By default, Network Level Authentication (NLA) is disabled in Windows XP Service Pack 3. To enable NLA, you have to turn on the Credential Security Service Provider (CredSSP). For more information about how to turn on CredSSP, click the following article number to view the article in the Microsoft Knowledge Base: Microsoft KB Article 951608: Description of the Credential Security Service Provider (CredSSP) ...


Windows XP SP3 or Vista SP1 will see a dialog box prompt them when opening an RDP connection via Remote Desktop Web Connection (2003) or TS Web Access (2008). The dialog box will be similar to the following: 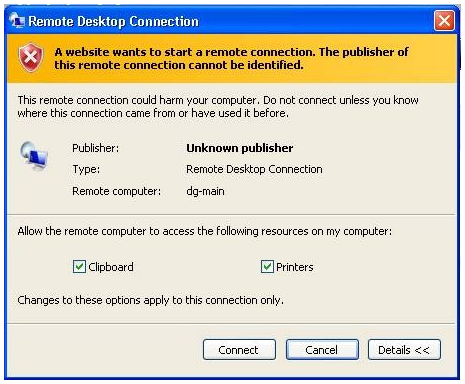 The user can click Connect and they are still connected to the server.


This problem occurs because the RDP 6.1 client requires server authentication and when accessing a server via the internet, the Remote Desktop server cannot verify its identity to the client without using a Certificate.


This will create a signed RDP file listed under RemoteApps that will connect back to the same server.


See the following blogs for more information about the changes to the RDP client and how to sign RDP files:

Single-Sign-On is a new feature of Windows Server 2008 that allows the RDC client to send the credentials of the currently logged-on user to the Terminal Server so that the user does not have enter them again when making a connection. SSO is configured by using group policies that control credentials delegation, and Windows XP clients must have CredSSP enabled in order for SSO to function. The Terminal Server (now Remote Desktop Services) product team has a good write-up on how to configure Single Sign On for systems running both Windows XP and Windows Vista: RDS Team Blog: How to Enable Single Sign On for Terminal Server Connections .