One of the most common calls that we get relates to the warning dialogs, the "gold bar" message or even the infamous "Red X" image being displayed where the ActiveX control should be loaded.  In some instances, the problem is caused by a failure of the control itself.  However, the more common cause is due to the way that the Internet Explorer Zone security settings are configured that prevents the control from loading (or disabling some of its features).  Below are the ActiveX failure messages that we've all seen: 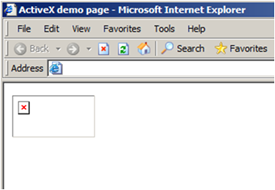 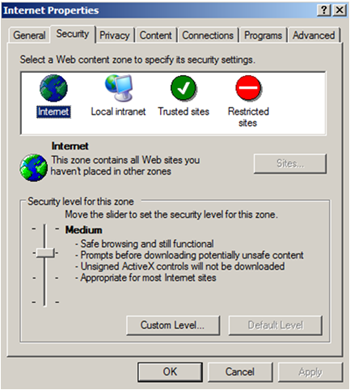 Each of these security zones uses a default template which can be viewed by highlighting the zone icon in the list as shown above.  The templates are designed to provide the best security possible when connecting to web sites.  The security settings for these zones can be customized by selecting a zone and then clicking on the "Custom Level ..." button.  Although the templates are in place, there are no sites added by default to any of the zones shown above.  Within each of the templates there are individual security settings that pertain to ActiveX controls.  The table below shows the details for the ActiveX controls and plug-ins security settings.  Please note that some of these settings are specific to Windows XP Service Pack 2 and later operating systems.