Turn on suggestions
Auto-suggest helps you quickly narrow down your search results by suggesting possible matches as you type.
Showing results for
Show  only  | Search instead for
Did you mean:
Finally a Windows Task Manager Performance tab blog!
By


Good morning AskPerf!  How many times have we looked at Windows Task Manager and wondered what the values on the Performance tab meant?  Why do they not add up?  What is the difference between Free and Available Memory, etc., etc., etc.?  In today’s post, we will take a look at these values and explain what each one means.

Below is a screenshot of the Performance tab from a Windows 2008 R2 Server with 16GB RAM and a 16GB page file: 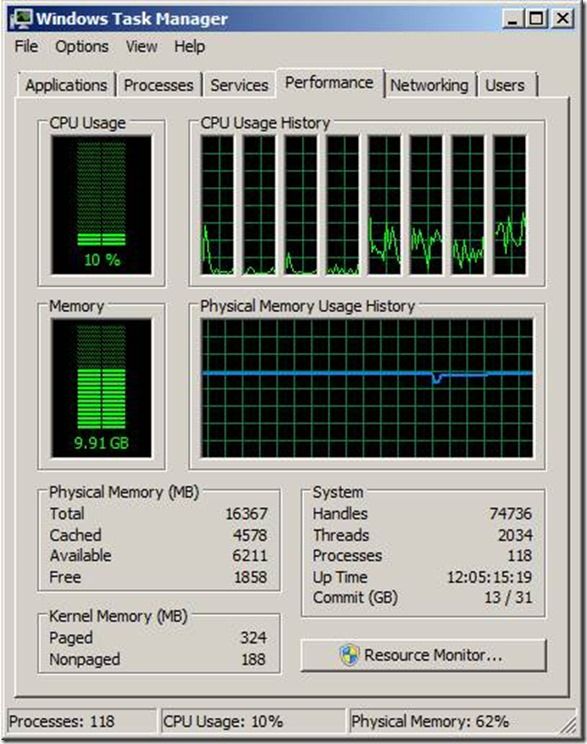 The Performance tab is divided into the following sections:

We need to keep in mind that the Memory Usage graph (showed in Windows Vista/2008/7/2008R2) is the sum of all the process’s private working set.  On older Operating Systems (XP/2003), the PF Usage value seen is the Total System Commit.  This represents the potential page file usage, i.e how much pagefile would be used if all the private committed virtual memory in the system had to be paged out to the disk.

Now taking a detailed look at the Physical Memory section:

Under the Kernel Memory section, we have:

Here’s some information about different states of a Page in Memory (Reference: Windows Internal 5 th Edition):

With that, we have come to the end of this post.  Please feel free to post additional questions below.  Until next time.