Turn on suggestions
Auto-suggest helps you quickly narrow down your search results by suggesting possible matches as you type.
Showing results for
Show  only  | Search instead for
Did you mean:
Error with the creation of an unmanaged VDI Pool collection
By

Error with the creation of an unmanaged VDI Pool collection


Good morning AskPerf!  Ramesh here from the Microsoft Platforms Support Team.  I am blogging today about an issue I recently worked.  This particular issue was with the creation of an Unmanaged Virtual machine-based desktop pool collection on a Windows 2012 Server.  When I attempted to create a Virtual machine-based desktop pool collection, the following error appeared: 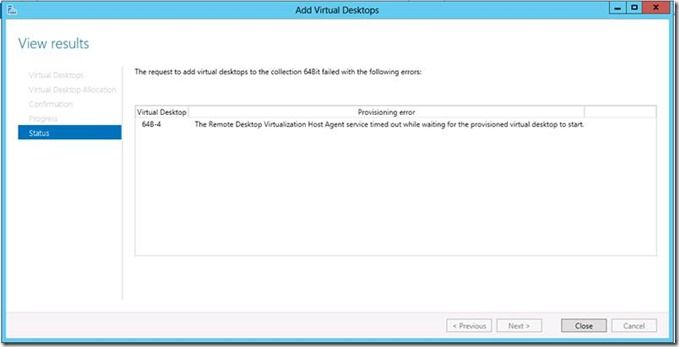 NOTE the error above is a generic one, and indicates that Remote Desktop did not receive a notification from Hyper-V that the VM started.  You likely either have a Hyper-V problem or a problem with the VM itself and further troubleshooting is necessary.

For Windows Deployment with the Windows ADK, click here .