Turn on suggestions
Auto-suggest helps you quickly narrow down your search results by suggesting possible matches as you type.
Showing results for
Show  only  | Search instead for
Did you mean:
AskPerf goes to TechReady 5: Wrapping Up
By

AskPerf goes to TechReady 5: Wrapping Up

Three days down, three to go.  After the madness of Tuesday, was there any way to keep the adrenaline pumping at the same high levels for the second half of the conference?  Plus, since I (CC) had never been to Seattle before - what did I think of Seattle?  Read on, and all shall be revealed ...

Day Four: Wednesday, July 25 :  There was no general session today, so we got off to a slightly later start.  The first breakout session of the morning was titled “Performance: Black Art or Science”.  Although the session wasn’t exactly what I thought it was going to be about, one of our Architect Advisors provided some unique insights into incorporating performance considerations into solution architecture – and the methodologies he uses when analyzing and designing solutions.  The session was really focused at those who are in the Consulting or Architecture space, but there were definitely some good takeaways.

The other two sessions we attended on Wednesday were probably the two best breakout sessions of the conference so far – "How Windows Server 2008 affects the IT Infrastructure" and "The Network is Slow".  Both sessions were highly entertaining, VERY technical and were head and shoulders above the rest.  The Infrastructure presentation had multiple presenters effectively interact and work off each other to really keep the audience engaged and excited.  Demos of Windows PowerShell and Server Core were the highlights of the session.

The Network Session was presented by Laura Chappell from Wireshark University who is quite simply an exceptional presenter.  Ms. Chappell presented this same session at TechEd, and you can download her presentation (and the network traces) from that event from the Wireshark University site.  Ms. Chappell has been doing network forensics and analysis for twenty-odd years, and she had a wealth of anecdotes from the field – her aggressive honeypot episode and adventures as an undercover secretary were especially humorous.  There were four demos for this session, each of which were actual reviews of network captures to illustrate the most common slow network scenarios.  Scenarios such as “Another Lousy Hotel Network” and “Why is my download so slow” were very informative, and she also presented an analysis of a VERY rare TCP 3-way handshake issue.  And with that, it was on to Thursday - the busiest day of TechReady 5.

Day Five: Thursday, July 26 :  If Tuesday was "The Running of the Geeks", Thursday was "Marathon Day".  Although there was no general session on Thursday, we had extremely full schedules.  Jerry and I had five breakout sessions scheduled, as well as the TechReady 5 attendee party that evening.  In addition, some of the Microsoft Blogger community were gathering for a quick "Town Hall" meeting before the attendee party.  So, on to the session review ...

Our morning sessions consisted of a Chalk Talk on Windows Server 2008 Failover Clustering and a look at Advanced PowerShell Scripting.  Remember that Chalk Talks are basically free flowing discussions - so after a quick word about some new features, the discussion was on.  The Program Manager who was facilitating the session couldn't stress enough that Clustering in Server 2008 was (as he put it), "Clusters for people without PhD's", which I thought was a very effective description.  We spent quite a bit of time going over some of the feature enhancements in Server 2008 and comparing the differences with Clustering on Windows Server 2003.  Don't fret - we've added some Windows Server 2008 Clustering posts to our list of "to-do's" for blog posts!

The second session of the day was all about Advanced PowerShell Scripting.  Specifically, we talked about "High-Return Techniques" such as using Regular Expressions, .NET scripting and Extending Types and Objects.  The session was presented by Lee Holmes , who is the author of the upcoming book, Windows PowerShell: The Definitive Guide .  The session got deep into PowerShell scripting - for the code warriors in the audience, this was one of the best sessions at the event.  Neither Jerry or myself are hardcore scripters by any stretch of the imagination, but the session was a terrific look at the versatility of PowerShell.

After lunch, we sat in on another Directory Services presentation.  Much of the information had already been presented in other sessions but there was more of a deep-dive into deployment considerations of Read-Only Domain Controllers as well as a look at how to prevent accidental Object deletion (it's a checkbox!) in Windows Server 2008 and some Backup and Recovery considerations. 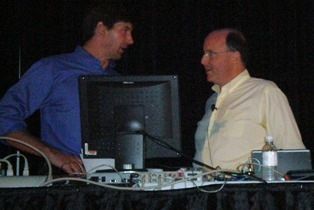 Session Four was the one that we had been looking forward to all week - Mark Russinovich of Windows Internals fame presenting a session on Windows Server 2008 Kernel Advances.  Naturally the session was packed but Jerry and I had planned ahead and secured good seats in the second row for the presentation.  Imagine our surprise when we showed up to find not only Mark Russinovich, but also Windows Internals co-author David Solomon on stage!  Watching these two notables co-presenting a session was sure to be a treat!

The session lived up to the hype in every respect.  With an agenda that included a review of Platform Support, Processes and Threads, I/O and File System changes, Memory Management and Security to name but a few, there was enough technical material to fill three or four sessions quite easily.  Perhaps one of the most interesting new features in the new Windows Operating systems is the Address Space Load Randomization feature (introduced in Windows Vista), which was covered in a Technet magazine article , written by ... Mark Russinovich.

At this point, Jerry and I parted company - he sat in on a Windows Server 2008 Server Core session, while I went off to mingle with some of the Windows Home Server folks (a product I've been playing with for some time now) and talk about the RTM bits and product launch plans, as well as look at some of the hardware concept designs (such as the "Hockey Puck").  In some respects I think we were both winding down for the day, given that we had been going non-stop since early that morning.  After the session, Jerry headed back up to our hotel room to relax for a bit before the evening's festivities.  Meanwhile, I headed off to the Bloggers Town Hall meeting.

The Town Hall meeting was really more of an informal gathering than a structured "Death by Powerpoint" session.  It was good to meet some of my fellow bloggers such as Sean Earp and Keith Combs face to face, as well as swapping thoughts with someone from the IE Team Blog .  I was excited to see bloggers from other parts of the world and get their views on how we were doing.  I must give a particular mention to our blogging colleagues from Down Under who were definitely well represented.  There were some spirited discussions on good blogging etiquette, strategy, team blogging as well as a debate on "what's next".  All in all, a very valuable experience.  Which brings us to the end of Day Five.  The sun was setting on TechReady 5 - only one more day to go ... 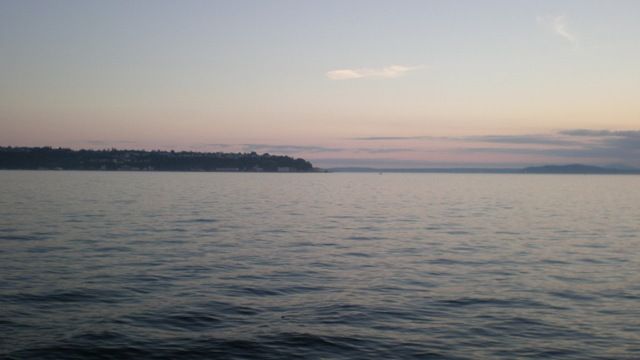 Day Six: Friday, July 27 : The last day of the conference was definitely very low-key compared to the previous day's activities.  A general session with James Utzschneider from Microsoft Dynamics and Danny Hillis , the co-founder of Thinking Machines kicked off the morning.  To round out TechReady 5, we attended a session on the new Server Manager features in Windows Server 2008 before ensuring that we had completed all of our session reviews, and making a final visit to the TechReady 5 store before heading back to the hotel to pack for our trip home the following day.  So that wraps up TechReady itself, but let me share my ...

CC's Thoughts on Seattle :  Jerry has been to Seattle before, but this was my first trip to the Pacific Northwest.  Having grown up in London, I fell in love with downtown Seattle.  When we walked around on Sunday morning, I was amazed that there were as many people out on the streets that early.  The weather was gorgeous the whole time we were there (only one brief rain shower).  Translation:  I can't wait to go back.

And since a picture says a thousand words ... here's my favorite pictures from the trip:

And that's it - AskPerf went to TechReady 5 - and had a blast!  I'm hoping that we get to go back soon.  Next week, we'll get back to our technical posts.  However, if you liked our posts on TechReady 5, that are a bit outside the norm, let us know!  Until next time ...