Turn on suggestions
Auto-suggest helps you quickly narrow down your search results by suggesting possible matches as you type.
Showing results for
Show  only  | Search instead for
Did you mean:
Windows 7, Windows Server 2008 R2 and the Group Policy Central Store
By


Mike here again to help bring clarity to something we are seeing with Windows Server 2008 R2 and existing Group Policy central store. Before that discussion, let us cover some background information.


So what’s the Problem?


The Group Policy Management Console and the Group Policy Management Editor always use the Group Policy Central store, when it is present. The pro here is that all instances of the GPMC and GPME use the same set of ADMX files. The con is that servicing ADMX files is difficult. Also, GPMC cannot use the local store as long as a Group Policy Central Store exists. So adding a single ADMX set for a single computer is not possible when using a central store. So, when we released Windows 7 and Windows Server 2008 R2, we also released a new set of ADMX files (within the operating system). These new ADMX files expose new Windows 7 and Windows 2008 R2 policy settings as well as policy settings for previous operating systems. Therefore, you need these files to configure Windows 7 Group Policies. Here’s where the dilemma continues.


A Central Store and Windows 7 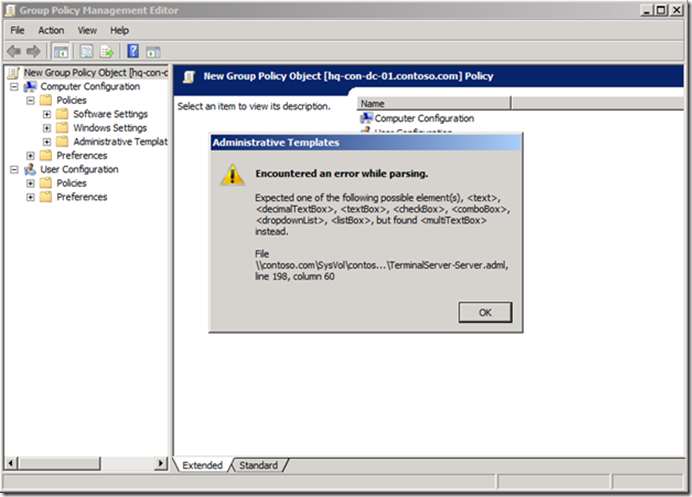 Windows Server 2008 R2 ADMX file, in this example the TerminalServer-Server.adml, contains an unknown element named <multiTextBox>. This element represents the REG_MULTI_SZ implementation that is new with Windows 7 and Windows Server 2008 R2. Newer ADMX files can contain new features, which older Group Policy Tools may not understand. This is why it is always a best practice to use the latest Group Policy Tools to manage Group Policy. Backwards compatibility is an important aspect of Group Policy; however, forward compatibility is not. 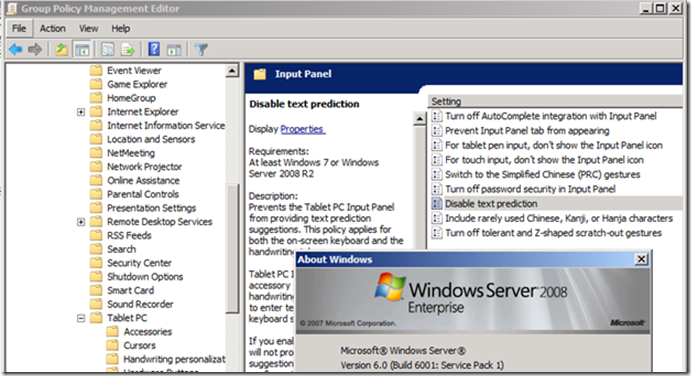 
An Alternative to the Central Store


There is way for us to “have our cake and eat it too”. The answer is Terminal Services. I often suggest to customers that have many people managing Group Policy to setup a GPMC Terminal Server. Dedicating a single server as the means to manage Group Policy provides:


Group Policy is a critical part of the enterprise and yet it seems little is done to reduce its exposure. A dedicated Terminal Server running GPMC provide a true single point of management for the entire Group Policy experience. Terminal Services security can be implemented to reduce the number of people having access to GPMC. Auditing interactive logons can further assist with identifying changes made to Group Policy. Combine this with using Group Policy to prevent other computers from opening GPMC and you’ve effectively lowered the surface and exposure to Group Policy to only the people that actually need it.


Hopefully, this helps with understanding the pros and cons of using a Group Policy Central Store. Also, it should help with answer some of the common questions that arise regarding updating the central store or managing the latest Group Policy settings with Windows 7. And lastly, perhaps consolidating Group Policy Management to a Terminal Server will help limit access to Group Policy management to only the people that actually need it.