Disk Image Backups and Multi-Master Databases (or: how to avoid early retirement)

First published on TechNet on Apr 21, 2011
Hi folks, Ned here again. We published a KB a while back around the dangers of using virtualized snapshots with DFSR:


Customers have asked me some follow up questions I address today. Not because the KB is missing info (it's flawless, I wrote it ;-P) but because they were now nervous about their DCs and backups. With good reason, it turns out.

Today I discuss the risks of restoring an entire disk image of a multi-master server. In practical Windows OS terms, this refers to Domain Controllers, servers running DFSR, or servers running FRS; the latter two servers might be member servers or also DCs. All of them use databases to interchange files or objects with no single server being the only originator of data.
The Dangerous Way to Backup Multi-Master Servers


Note: It is ok to take these kinds of outside backups as long as you are also getting a backup that runs within the running multi-master guest computers. Naturally, this internal backup requirement makes the outside backup redundant though.

Starting in Windows Server 200 8, we incorporated special VSS writer and Hyper-V integration components to prevent insidiously difficult-to-fix USN issues that came from restoring domain controllers as "files". Rather than simply chop a DC off at the knees with USN Rollback protection , the AD developers had a clever idea: the integration components tell the guest OS that the server is a restored backup and resets its invocation ID.

After restore, you'll see this Directory Services 1109 event when the DC boots up: 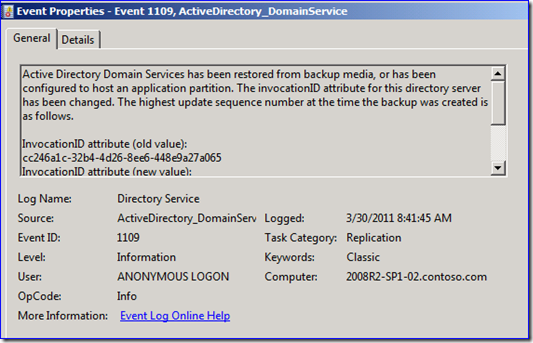 This only prevents a problem; it's not the actual solution. Meaning that this DC immediately replicates inbound from a partner and discards all of its local differences that came from the restored "backup" . Anything created on that DC before it last replicated outbound is lost forever. Quite like these "oh crap" steps we have here for the truly desperate who are fighting snapshot USN rollbacks; much better than nothing.

Multi-master databases are some of the most complex software in the world and one-size-fits all backup and restore solutions are not appropriate for them.
The Safe Way to Backup Multi-Master Servers
When dealing with any Windows server that hosts a multi-master database, the safest method is taking a full/incremental (and specifically including System State) backup using VSS within the running operating system itself . System state backs up all aspects of a DC (including SYSVOL DFSR and FRS), but does not include custom DFSR or FRS, which is why we recommend full/incremental backups for all the volumes. This goes for virtualized guests or physical servers. Avoid relying solely on techniques that involve backing up the entire server as a single virtualized guest VHD file or backing up the raw disk image of that server. As I've shown above, this makes the backups easier, but you are making the restore much harder.

And when it gets to game time, the restore is what keeps you employed: your boss doesn't care how easy you made your life with backups that don’t work.
Final thoughts
Beware any vendor that claims they can do zero-impact server restores like those that I mentioned in the " Dangerous " section and make them prove that they can restore a single domain controller in a two-DC domain without any issues and where you created new users and group policies after the backup. Don't take the word of some salesman: make them demonstrate my scenario above. You don’t want to build your backup plans around something that doesn’t work as advertised.

Our fearless writers are banging away on TechNet as I write this to ensure we're not giving out any misleading info around virtualized server backups and restores. If you find any articles that look scary, please feel free to send us an email and I'll see to the edits.