Turn on suggestions
Auto-suggest helps you quickly narrow down your search results by suggesting possible matches as you type.
Showing results for
Show  only  | Search instead for
Did you mean:
Can Apple, Linux, and other non-MS operating systems connect to DFS Namespaces?
By

Can Apple, Linux, and other non-MS operating systems connect to DFS Namespaces?

First published on TechNet on Jan 18, 2011
Hi all, Ned here again. I’ve been asked a few times if other operating systems can utilize DFS Namespaces running on Windows Server. It’s a sticky wicket; as a “voice of Microsoft” my statements carry a lot of weight - deserved or not. It’s not smart or ethical for me to say that something not made by Microsoft works well, works better than something else, or doesn’t work at all. In some cases, lawyers may be summoned from Vhoorl.

With that in mind I am treading lightly. Feel free to discuss further vendor options in the comments area, we have that precedent .


An OS needs to implement a DFS client to use Namespaces. If the OS doesn’t provide one, you will have to find a third party. It’s one thing to support SMB/CIFS these days –it has become the de facto standard for file servers. But it’s something else to support DFS; this requires new logic and an understanding of the referral process .

Microsoft doesn’t make an out of band DFS client anymore, only the one that comes in Windows itself. Because of the requirement to use DFS in Active Directory (for SYSVOL and group policy processing), we have to guarantee an in-box client exists. We do this through the client redirector and a filtering driver called MUP.SYS. This diagram is a bit out of date but it gives you the gist: 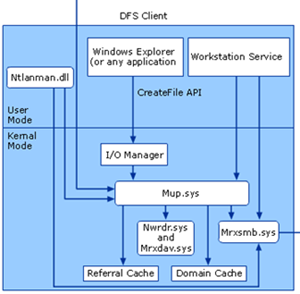 Let’s talk about some others.


The current Mac OS is based on the UNIX XNU, Mach, and FreeBSD kernels. OS X implements SMB connectivity - but not through Samba. According to the Apple discussion forums , Apple uses a very old version of FreeBSD smbfs and while it lets you connect to a DFS path starting in 10.5, it does not understand permissions or allow you to access files.

You therefore need to purchase a 3rd party add-on. Apple lists a few on their website, so I consider that their answer and I don’t mind feeding you a search link:


Make sure you read Apple’s fine print before you try to call them for support:


I find a few more that are not listed by Apple:


As far as IOS 4.x native support goes, I found nothing at all. You will need a third party add-on to implement SMB/CIFS on iPad, according to Apple . No word on whether that means DFS too.


By some people’s definition the Linux Kernel does not have a remote file system (or a local file system); it’s all modular goo. In reality, people usually go through a specific distro and in some later kernels CIFS support is becoming standard . In nearly all cases you can use Samba, so I don’t mind pointing you to it:

Interestingly, Samba’s website also points to number of other CIFS clients, most of which no longer seem to exist (see the bottom of this page):


There was also smbfs for Linux but it has been discarded and is no longer maintained (perhaps why Apple’s OS behaves as it does; from looking around this client is not being maintained in other OSs either).

Update: One of our awesome readers had some more distro-specific experience to share with us. Thanks Bill!


Red Hat added DFS support to their kernel-level CIFS driver in Red Hat Enterprise Linux version 5.3, though the feature was rather underreported (one of the few search results I found that reported the change was http://www.h-online.com/newsticker/news/item/What-s-new-in-Red-Hat-Enterprise-Linux-5-3-7... ). Instructions for for testing it out are at http://blog.evad.info/2009/02/21/how-to-use-cifs-dfs-in-red-hat-enterprise-linux-53/ ... . Apparently the code was checked in the Linux kernel in version 2.6.25 and is also available in the Ubuntu distribution as of version 8.10. I haven't gone back and tested it in quite a while, but from what I recall, it worked fine with stand-alone DFS namespaces; I never tested it with a domain-based namespace.


Google has not released Chrome OS as of this writing (it slipped to sometime in mid-late 2011). Chromium is an open source project you can build yourself but it is so new and so amorphous I can’t find any statements on its support of DFS or even CIFS/SMB. It’s based on BSD so one might assume it will implement smbfs (with the DFS limitations that this entails), but one hopes that Samba would be possible. With the coming of Android Honeycomb the future is looking cannibalistic so Chrome may never get the backing it needs to bother with DFS. And with both OSs being marketed in a very consumer-oriented fashion (much like Apple), your calls for DFS may end up falling on deaf ears. Let us know how it pans out.

Ned “it hurts when I do this” Pyle
0 Likes
Like