Turn on suggestions
Auto-suggest helps you quickly narrow down your search results by suggesting possible matches as you type.
Showing results for
Show  only  | Search instead for
Did you mean:
ADMT 3.2: Common Installation Issues
By

First published on TechNet on Jul 09, 2010
Hello folks, Ned here again. ADMT 3.2 was released a few weeks ago and we have a decent understanding of common installation issues that you might run into. Hopefully this helps you unblock or prevents you from blocking in the first place someday. One of these is headed to a KB near you as it’s too tricky to figure out and people are likely to hit it even when doing everything “right” otherwise.


SQL Server 2008 SP1 install returns error "Invoke or BeginInvoke cannot be called on a control unit until the window handle has been created.."


"SQL Server Setup Failure.
SQL Server Setup has encountered the following error:
Invoke or BeginInvoke cannot be called on a control unit until the window handle has been created.."

This error is purely within SQL Express 2008 and is not really to do with ADMT 3.2. The issue is fixed in "Cumulative update package 4 for SQL Server 2008".

Unhelpfully, this error is identified in KB975055 as being only for Windows 7 and that it was fixed by SP1 - both incorrect. The issue does affect Win2008 R2 and is only fixed by the cumulative update.

Before installing SQL Server Express 2008 with SP1 (which will fail), first install:

It's perfectly alright to instead use SQL Express 2005 SP3 instead of SQL Express 2008 SP1. It will install and run fine on Win2008 R2, and since you are using SQL Express anyway, it's not like you were customizing anything or trying to use existing infrastructure.


ADMT 3.2 install error "admtinst.exe is not a valid Win32 application"

When attempting to install ADMT 3.2, you receive error:


“Admtinst.exe is not a valid Win32 application"

You are attempting to install ADMT 3.2 anywhere but on Windows Server 2008 R2.

This is by design behavior.

When installing ADMT 3.2, you get error:


“The Active Directory Migration Tool v3.1 must be installed on Windows Server 2008.”

You are installing ADMT 3.2 on a Windows 7 computer.

Sigh… an old error string got referenced here by mistake. The block is intentional and expected, however. If you try to install on a Windows Server 2008 R2 core server, it will also say “v3.1” incorrectly.


ADMT 3.2 error "Unable to connect" when connecting to a remote SQL instance

When installing ADMT 3.2 you are prompted with the Database Selection screen: 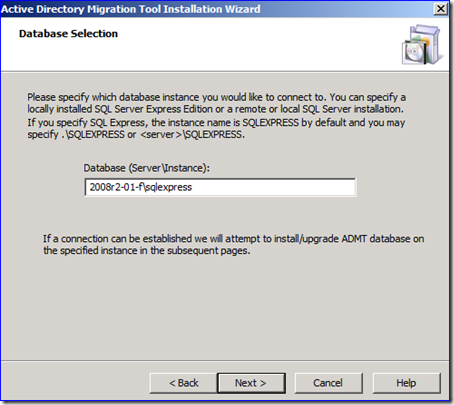 If you enter a remote “server\instance”, the following error is always returned:


"Unable to connect to 'server\instance', please ensure the SQL Server hosting this instance is running and connections can be made to this instance. [DBNETLIB][ConnectionOpen (Connect().]SQL Server does not exist or access denied."

If you use a local instance of SQL running on the computer, no issues.

The remote instance is running SQL Server Express edition (2005 SP3 or 2008 SP1, it doesn't matter). ADMT is not allowed to connect to remote SQL Express instances. Even if configuration work is done on the Express instance to allow remote connections, the error will then change to:

If you want to use multiple ADMT 3.2 consoles to connect to a single remote SQL instance, that instance must be running SQL Server 2005 or 2008, and not an Express edition.

When installing ADMT 3.2 on a Windows Server 2008 R2 domain controller and using a SQL Express 2008 with SP1 instance, the installation completes without errors.

However, the “Active Directory Migration tool Installation Wizard” completion screen (like below) is not shown: 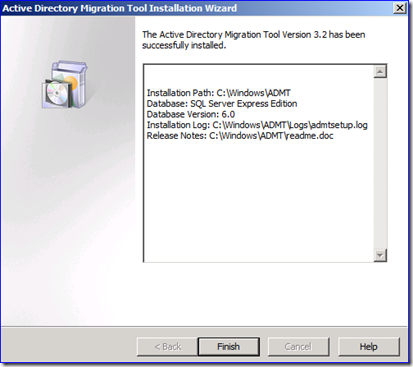 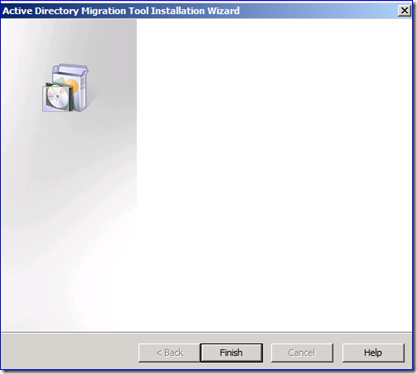 When then attempting to run the ADMT console, you receive error:

The MMC console then displays:

A code defect in ADMT's interoperability with SQL Express 2008 SP1 on DC's where the expected "SQLServerMSSQLUser$ComputerName$InstanceName" group is not created. This is required by ADMT to configure specific permissions during the ADMT install and allows the ADMT database to be created in the SQL instance. ADMT does not expect the group to be missing, which leads to the blank dialog and an incomplete installation.

I also wrote a KB on this and it’s coming soon.

If you have a requirement to install ADMT 3.2 on a domain controller in order to use command-line or scripted user migrations with SID History, install SQL 2008 SP1 (non-Express edition) on a Windows Server 2008 R2 member server in the target domain and select that remote instance when installing ADMT 3.2 on the DC. Alternatively, you can install SQL Express 2005 SP3 on the DC.

If you have a requirement to install ADMT 3.2 and SQL Express 2008 SP1 on the same DC, use the following steps on target domain DC:


That’s everything we’re aware of currently. Like I said above, I have a KB coming shortly for the last issue mentioned, but it’s basically a copy of the above without pretty pictures. The ADMT migration guide will also be updated and (for the short term) the FWLINK that ADMT 3.2 points to when it sends you to a SQL install is going to be sending people to SQL Express 2005 SP3.