I'm trying to deploy a very basic Node JS app which uses a front-end built on React to a Linux App Service. I'm using Azure Pipelines to create a build artifact named "deploy" which has the following structure:

I added an Environment Variable named "WEBSITE_NODE_DEFAULT_VERSION" to set the correct Node version to use, but I'm not sure if I need any "SCM*" vars.

I created a release pipeline which uses the Azure App Service Deploy task to push the build artifact out to the App Service, configured as shown: 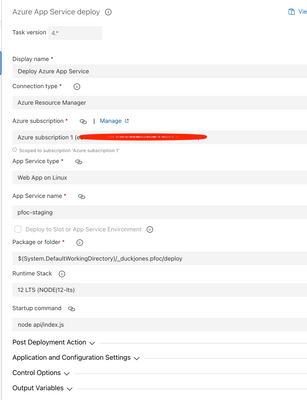 I was hoping the Startup Command value of "node api/index.js" would start the server correctly, but I'm still getting the default landing page telling me to upload some code. What's the best way to host a Node JS app service with a nested directory structure? Or should I move my Express app to the root?