Creating a relationship between one main table and two sub-tables

Creating a relationship between one main table and two sub-tables

Please let me know how to fix this and if there is a better way to plan this. Thanks so much!

Re: Creating a relationship between one main table and two sub-tables

What you are describing is actually NOT a really helpful design feature, as a matter of fact. I'll get back to this point after explaining what it is. This is what is referred to as "Subdatasheet". It's a feature of Access which APPEARS to be really handy because it allows the records of a related table on the many side to be shown embedded in a so-called subdatasheet in the one-side table.  You can define it here. 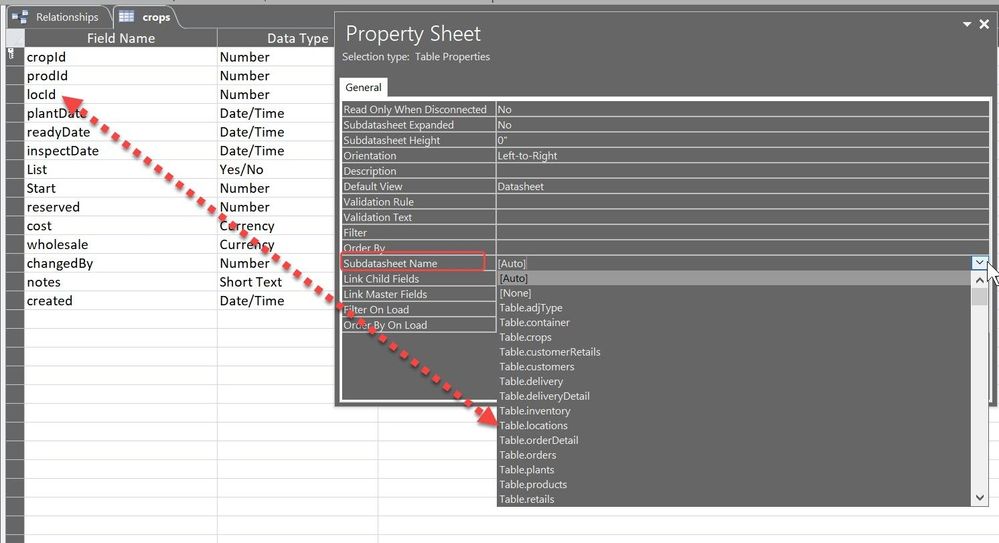 That allows you to drag EVERY SINGLE RECORD from the many-side table into the one-side table when you open it in datasheet view. Seems handy, right? It's a drain on performance. And it is extremely unlikely that you will ever show the table directly to a user anyway, so it's sort of a superfluous fillip anyway.

For that reason, most experienced Access developers will take steps to eliminate them as quickly as possible when they encounter them.

In my more than twenty-five year career I think I've seen one relational database application that employed this feature in a production environment.

creating a relationship between two sharepoint lists in access