Odd new behaviour when saving import steps. Last page of Wizard should show something like this: 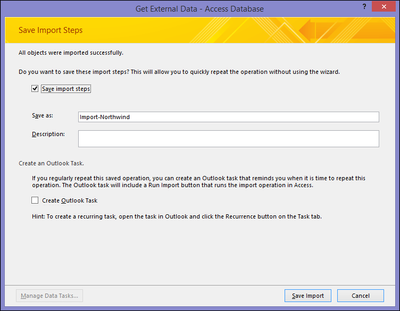 However, when I check "Save import steps" I no longer get the Save As/Description text boxes: 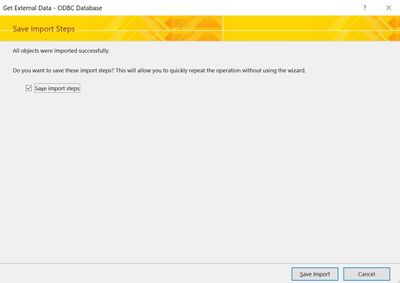 If I click "Save Import" I get this error message: 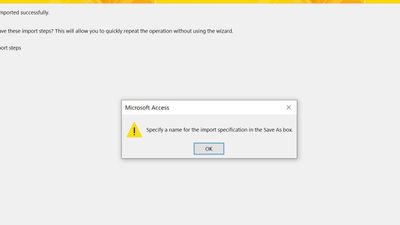 Is anyone else getting this? Any idea how to fix?

Yes I can replicate this error for both imported Access objects and other imports such as text files.
However, I can confirm that the import is saved despite the final screen not appearing.

Sadly there seems to be at least one new bug every month.
I will report this bug to the Access team and hopefully it will be easily fixed e.g. with a feature gate rollback

Worrying for business-critical software such as MS Access that this can suddenly break. We were just using it to build a (simple but important) internal subscription management database and 3 weeks off going live. If this had happened in 4 weeks time it would have caused serious, serious problems.

If this is a common thing with MS Access, would you recommend an alternative, more stable solution (e.g. LibreOffice Base)?

Irritating though the spate of recent bugs have been, most have been fixed very quickly.
I've already had a reply from MS stating that the cause has been identified and that a fix will be released fairly soon.

For info, the bug was also present in v2206 but you were the first to mention it. The fact that a fix is in progress already is I think fairly impressive
In this case, I don't see how the bug would have had very serious problems. As already stated, the import/export is actually saved despite the final screen not appearing.

Anyway, to reduce your exposure to bugs, you could change from the monthly channel to e.g.semi annual.

As for alternatives, it depends on what you need from a database.
In my opinion, none of the alternatives to Access such as Libre Office have anything like the power, range of features and support is unlikely to be as speedy.
If you only need a very basic database then other options may be suitable. But for anything more complex, I doubt you will find anything to match Access
0 Likes
Reply

MSFT has fixed the issue. It should roll out to current channel late September or early October. That seems a month too late. I will ask for confirmation.

That said: YOU are the one who could have avoided this altogether. It is not a best practice to be on Current Channel for a business that is not living on the bleeding edge. Let others deal with the bugs, and sit pretty on Semi-Annual Enterprise channel.